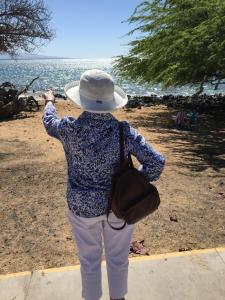 After dropping my houseguests Jack and Jean at the Kona airport for their flight back to San Diego, I decided to go to a local state park near the shopping area to read and watch for whales. As I slung my beach chair over my shoulder I noticed there were more men than women enjoying the beach. Not necessarily a bad thing. I found a shady spot for my chair and said hi to the man sitting at the picnic table under the next tree before getting out my book.

In clearly articulated speech he told me that the Kona coast where we were was the warmest place in the United States, but that there was a place one degree warmer in China, his next destination. He then proceeded to tell me his theory of everything, how everything had the same attributes, and how the purpose of law (since he asked my occupation) was to find the best result for the client as quickly as possible, and that was the law of science and engineering that governed all things. I thought that was an interesting and probably worthwhile goal of law and chatted for a few minutes. I excused myself to my book, remembering to tell myself that I was safe, he probably wasn’t dangerous, there were people around who would help me if needed. After a few other of his soliloquys, I stopped mm-hmming and kept looking at the ocean. I saw two whale incidents that included breaching, flukes, and spouts and read several pages. When he asked/ declared that my husband was not out enjoying the day, I said no and several minutes later decided it was too warm to sit outside much longer. Maybe I was sitting in the hottest place in the US.

I then went for comfort food groceries to help me forget Jean and Jack had gone. To my delight and after striking out at Island Naturals I found Barbara’s cheese puffs (original, baked) at the KTA. All I needed then was some POG (papaya, orange, guava) a favorite drink since my first plane ride to Maui 30 years ago. I also picked up some graham crackers, which I bought in memory of Jim.

Well-fortified, I made my way up the windy road to my beautiful home on the Big Island. Who says life isn’t full of possibilities?!