– a Christmas story in How to Be a Widow

Once upon a time there was a lady whose husband of many years had died. She had a sister, two brothers, two sons and a grandson. During the many years she was married, she and her husband always got a pretty Christmas tree that came from the mountains nearby. The trees were usually big and while not always perfectly shaped they were perfectly beautiful.

Her son and her grandson usually went with her to pick out the tree, and they did that this year. She picked out a big tree with two main branches. Because it had two main branches, it wasn’t perfectly straight. After her son and grandson put the tree up for her, it began to lean over. One day, after the beautiful tree was up and decorated, it started to fall over. What could she do? She was home by herself. She wished her sons could help her but they were busy and they lived far away. The lady called her neighbor and they propped the tree up with chairs so it wouldn’t fall over. Other people tried to help get it to stand up straight. Finally, she put two popsicle sticks in the stand next to the trunk and the tree stood up straight. It was like magic.

When she told her sons about the tree they said maybe she shouldn’t get a big Christmas tree any more. Her husband had died, she was alone, and she was getting old. Her sons worried that when she got a big tree she couldn’t take care of it. When she thought about not ever getting a big Christmas tree again, she felt very sad. It made her feel like her life was almost over.

She felt a little better after she went to a party and saw a pretty, little tree. It was small, and it was on a little table so it looked tall. It was about one fourth as big as her big tree. She saw how easy it was to make the little tree stand up straight.

However, the old lady wasn’t convinced. She didn’t know what she would do next year, because she loved her big trees, and still hoped she could get one next year.

What do you think she did? 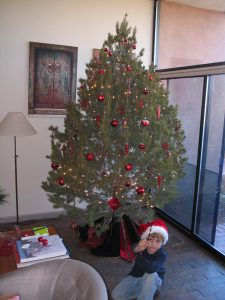